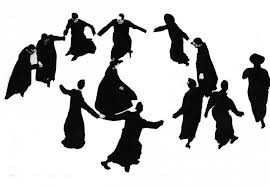 I now consider if the dream points to the old inner religious wars among my selves. The feminine dancing, singing, levitating woman leaves the patriarchal cathedral hall. In my imagination, I see Sally Field, starring in The Flying Nun. Levitation not only goes against gravity, it is gravely sinful and unseemly by a woman in the cathedral. I remember very clearly my earlier association of levitation with witchcraft. My imaginary eyebrows waggle at the image of bishops, theologians, canon lawyers, or the Inquisitors response to levitating women. I imagine it is entirely possible that in the war on wise women healers across Europe, levitating women saints became evil, black, hags, or witches flying on broomsticks.

In my relentless search for facts, I find that St. Francis of Assisi levitated three to four cubits, about 1.4 metres, high and sometimes even as high as the nearby bushes. He is said to have been embarrassed by these events. I found the work of Dr. Michael Grosso, The Man who could fly: St. Joseph of Copertino. In a delicious bit of irony, he suggests that the church was ‘unhappy’ with Copertino but there were too many high-profile witnesses to his levitations. He was placed under house arrest, much as Galileo. Patriarchal pride and ego make the choice between science and mysticism a bit difficult. The Vatican eventually rose to the occasion.

St. Joseph of Copertino (1603–1663) sometimes hovered a few inches above the ground, sometimes flew high in the air—in front of large crowds all over Italy. The church canonization process involves in-depth investigations, and thus there are many written records, including 150 eyewitness testimonies, providing detailed information about Copertino’s levitations. Reference, https://en.wikipedia.org/wiki/Joseph_of_Cupertino accessed October 28, 2021  Of course, as with most paranormal events, skeptics abound. The skeptics simply do not understand that different dimensions of reality have different conventions. The conventions of earth include density, linear logic and many more that we think apply to earth but NOT to the Fifth Dimension. More on that later. About 30 years later!! Now when I think of great cathedrals, I see edifices created to honour the sky gods. I am in a deep spiritual search for new nourishment. The ceramic, the stone, the walls I have lived in are broken. I am a seeker. An explorer looking to break old boundaries and explore the conflicts.

Bread is a powerful image of feminine transformation just as the mystical transmutation of bread and wine into the body and blood of The Christ. I am hoping to find assistance from two masculine aspects, two of my brothers. The image of Tony and I down on our hands and knees searching in the dark through the moldy bread for one good piece has remained a living question all these years.

Consciousness even now years later nearly succeeds in ignoring the priest, the broken alabaster pieces and the crucifix. The alabaster jar is a deeply feminine vessel symbol. In Mark 14, Mary of Bethany kneels and pours the ointment on Jesus’ feet, and dries them with her hair. Jesus’ response is to tell the disciples that Mary will be remembered forever for this act of kindness.

Depending on which version of the bible you read, Mary has been rendered almost invisible. Here, she pours oil on his head. Over there, she pours expensive perfume on his feet. Wordsmiths change history. I am restoring, transforming and changing the patriarchal symbols from within. I am gluing, repairing, dusting, and cleansing decades of patriarchy from my spiritual feminine self. Four is the number of wholeness. Even more whole than the Trinity of three. The concrete, hardened belief is broken into four pieces but the repairs are underway. The dream language shifts throughout the dream. It begins in a chapel with women, perhaps the field of the mothers; it becomes a cathedral, the field of the fathers, seeking out help from my own creative masculine. The authority of religion appears. The seeking continues. All the way to the Alabaster Sculpture in the days of my involvement with Seeing Red.