The Back Story through Memorable Moments

May 1993 I am deep in the process of full healing of the body following years (1947 – 1989) of repressed trauma. As I create this blog post 32 years later in August 2021 I look back and see my soul child self wrapped in an amnesiac’s cocoon. Psyche is a Divine Creation. Psyche knows. Psyche, soul, Creatrix, knows Her children. She protects her children. Not from life and its sometimes inexplicable vagaries. But psyche keeps us safe until we are strong enough to come out of our dark places slowly to face it. “I am with you always.” And so, from February 1989 to May 1993, I am preparing (unconsciously) for this day and this time. As my soul told me on January 2, 1989, “The endurance run is over.” That day, I heard the words. I didn’t understand them. Read I, the Woman, Planted the Tree: A Journey through Dreams to the Feminine, Gregor 2018. Read Estes, Women who run with the wolves. (1993) and if you are really dedicated to reading, read Perera, Descent to the Goddess: A Way of Initiation for Women. At the time of this reiki session, I knew very little of reiki or the goddess. I was however neverendingly curious. This blog is two parts. The next part will come. … I do not know just when!!

Moment One: Gender on a Cover

The conference is opened by Nel Noddings, author of Caring: A Feminine Approach to Ethics and Moral Education. When she takes time for questions, the first issue is “the pink book cover.” Sadly. The question of Christian ethics is never really explored. We don’t engage in dialogue. The most critical thing I hear from Noddings is in relation to the young Nazi soldier responsible for many deaths and his need/request for forgiveness. The pink book cover? I shake my head. The question is posed by a man. I am just becoming aware of how women with serious questions are silenced. Turns out it can be far too easy!

I realize, as I sit in the park surrounded by the All and watch the river, that all the talk of women as nurturers, relationship-oriented, and more caring than men is constructed gender. Trees dwarf me and grass supports me. I am within the mystery of this fast-flowing river carrying tonnes of silt to create some great ground of being to nourish life far downstream. I am a small fragment of silt waiting patiently to be caught up and carried along to provide nurturance for some green growing thing not yet born. I am a seed buried deep within some crevice on a distant shore in another land, pummelled by wind and rain and rushing water, only to spring forth as a towering tree. The feminine is as violent as the masculine. In fact, the Death and Destruction of Earth Mother ensures life. A violent act surely, this pounding torrent of water, a violent act yielding up the fruit of creation. An elm tree with six million leaves every season. What awe. What mystery. How sacred. How am I, mere mortal, to determine which act is senseless, bloody violence and which act creative, nurturance of a new living being? Feminine and masculine are not gender.

I walk miles each day. Walking is silent meditation for me. Tunnel Mountain, Sulphur Mountain, and others I cannot name. All invite me into their mystery.

I am staying at the Banff School of Fine Arts. The afternoon of May 20, 1993, as I come into the building, I stop at the bulletin board where I see the name of a reiki practitioner. I go to my room and make an appointment for later that evening. That reiki experience was deeply healing. Below are my Banff journal illustrations and notes reiki images that appeared in the reiki session. I would learn about Lilith, via Owl symbolism, vultures as Goddess symbolism, a snake crawling in a tree, a birthing woman, blood and praying hands. These images tell the story of an incredibly body-memory healing

The Reiki Story is told through images drawn in my journal and expressing the power of this body-altering work.

Image #1 The Owl and the Vulture 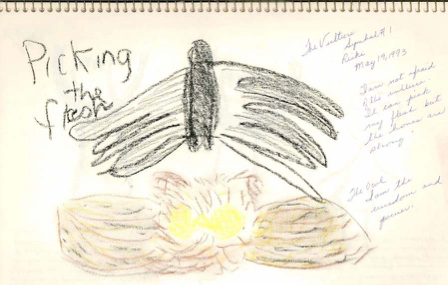 The dark wing of the vulture, sometimes a crow, is associated, on a transpersonal level, with death and destructiveness. “It is sacred to the Black Crone who sometimes appears in its shape. … On a transpersonal level, this suggests that the Death Goddess sometimes functions as that aspect of the Self that aggressively stands against inauthentic living and will actively destroy what the ego has falsely taken on as its way of being in the world” (Carlson, 1989, p. 83 and 109).

Merlin Stone in When God Was a Woman explains both the Vulture and Owl as goddess symbols. In Goddess mythology, the Owl is linked with Lilith. “(A)rchaelogists have found accounts of the sacred women in the earliest records of Sumer. … The Queen of Heaven was most reverently esteemed by the sacred women, who in turn were specially protected by Her. … One interesting fragment recorded the name of Lilith, described as a young maiden, as the ‘hand of Inanna.’ We read on this sacred tablet that Lilith was sent by Inanna to gather men from the street, to bring them to the temple. … Lilith later appeared in Hebrew mythology as the first wife of Adam, who refused to be sexually submissive … later as the name of the demon who hovered about, waiting to find spilled sperm, of which to make her illegitimate demon children” (Stone, 1984, p. 158). Lilianna Kleiner, artist and author, has greatly deepened and expanded the work of Stone through her art and several books.  The Song of Lilith, 2007 includes Hebrew stories. For me, learning the symbolism of the Owl together with the Vulture was mind-expanding. Symbolism is deep, rich and enables soul expansion!  It must never ever be taken literally. Symbolic!! 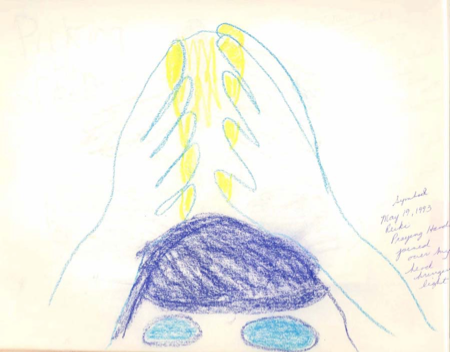 Image #3 The black represents the imaginary “goup” that poured from my body during the reiki treatment. 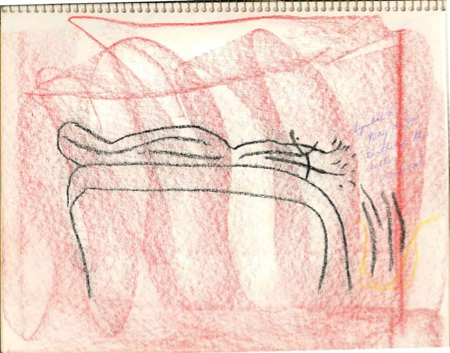 During the treatment, I had a strong sense of this ‘gouppy’ stuff pouring out down my body and out of my feet. I asked the reiki practitioner to put a bucket under my feet to catch. She did. Of course, it was imaginary. 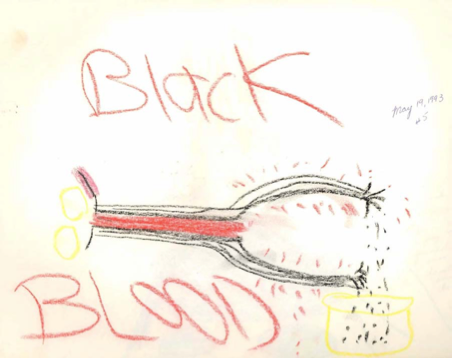 The red represents the love energy that flowed while the black represents the different energy, blood, that poured out of my body into the bucket at my feet. I believe this was a toxic release of repressed memory held in my body since the birth of my first child. I say little about this birth. Suffice to say, very difficult. The presiding nurse was a tyrant, clearly dislike women, and at one point snarled at me, “You got yourself into this, now didn’t you? Oh in later years, I thought of plenty of answers. But that is not the point. Now, in 1993, the deep convulsive rebirthing of that child leaves beautiful new memories. 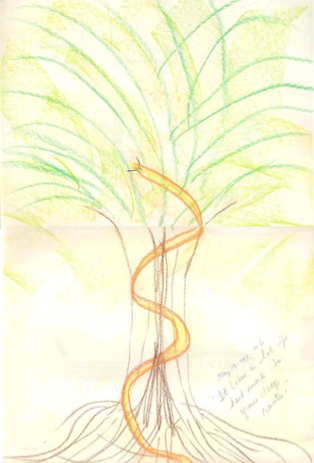 For me, the tree is the tree of the Goddess, creatrix, Ancient Mother. Twined around the tree is Sophia, the mythical Goddess of Wisdom. The snake imagery predates patriarchal monotheism. She was slowly made evil through patriarchal stories beginning probably between 8000 and 5000 BCE. Now, many Christians concretize mythology into predetermined form. Predetermined by a hierarchy of authority. Despite my very best writing, very best story, many insist on the literality of the Adamic myth as well as the fall caused by the woman, Eve, who listened to the evil snake. I have learned the story of Lilith. And the power of mythology. We all have much to learn. More in my Lilith Blog … soon.

These images are included in my doctoral dissertation, The Apple and the Talking Snake: Feminist Dream Readings and the Subjunctive Curriculum, UBC 2008.